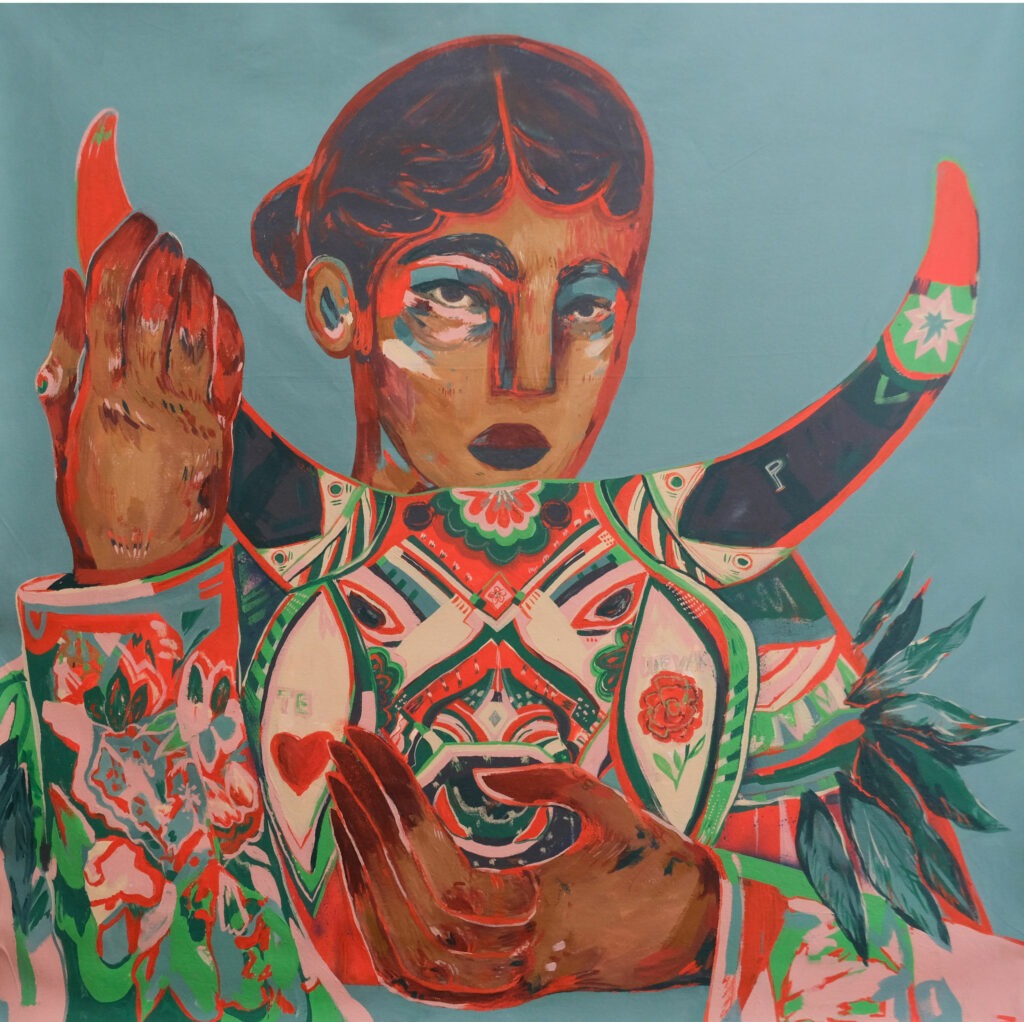 Jurena Muñoz Lagunas, Ju Mu, with Peruvian-Chilean roots born in 1990 in Hannover. Studied fashion design at the Universitat de les Illes Balears in Palma. She lives as a freelance artist in Berlin.

Her works are inspired by the cultures and imagery of the indigenous peoples of Latin America, prehispanic and contemporary art. Themes and representations spring from her own fantasies. They are nourished by myths, legends and stories of the vast Andean and Amazon regions and show a coexistence of man, the spirit world and nature, with elements of shaman worship.

They are about identity, tradition and culture, past and present, life and death. Her works catch and capture the attention of viewers immediately. For her, there is neither pure good nor absolute evil. Her paintings are, as she says herself, “colorful and loud.” With mysterious figures, mythical creatures, people, animals, monsters, enigmatic symbols and mysterious masks.

Ju Mu paints pictures on canvas, with acrylic, spray paint and oil pencils. She creates fabrics and costumes, designs walls and stage sets, creates sculptures and furniture. With almost inexhaustible creativity and diversity. She collaborates with traditional weavers and craftsmen, incorporating their work into her designs. “I use everything original and fascinating that I get my hands on during my travels through Latin America – in markets or through street vendors.”

She tells us in her works about subjugation, resistance and liberation. She reminds us: “When the Spanish began to conquer Latin America, they tried to erase the culture of indigenous peoples. Through violence and through missionization. They banned ancestor worship, traditional festivals and rituals. The indigenous people of Latin America had to hide their deities and beliefs and did it so skillfully in representations of the Catholic Church and its patron saints. They appropriated the iconography of the colonialists, absorbed it in their own design, reinterpreted it, and thus at the same time held on to their cultural wealth. In this way, the indigenous peoples preserved their deities and rituals – in the fusion of the different elements, as they are still visible and perceptible everywhere today.

“The creativity and the power of indigenous communities that emerge in it have had a lasting influence on my art,” sums up Ju Mu. “This can be seen in the colors, patterns, textiles, techniques with which I design my works.” She also designed traditional costumes for the exhibition of her work at the Vienna World Museum (July 2021 – February 2022). In her show, the dances of the Coyolillo Carnaval, Matachine (Mexico) played a major role. Also the Virgin of Candelaria (Puno Peru), the Carnival and the Yawar Festival (Perú). Always in connection with “Mother Nature” (Pacha Mama).

Originally, Carnival celebrates harvest festivals and honors ancestors.  With traditional religious symbols and beliefs, expressed also in music and dances – as a colorful and joyful celebration and at the same time subversive cultural resistance.

The Andean villages around Cuzco and Apurimac have been celebrating the Yawar Festival “Blood Festival” or Toro Pucllay every year since 1560 until today. A condor is captured and tied to the back of a bull. The condor embodies the Incas and connects heaven and earth. The conquistadors brought the bull from Spain to Latin America. The ritual with the condor attacking and shaking off symbolizes the struggle for freedom.