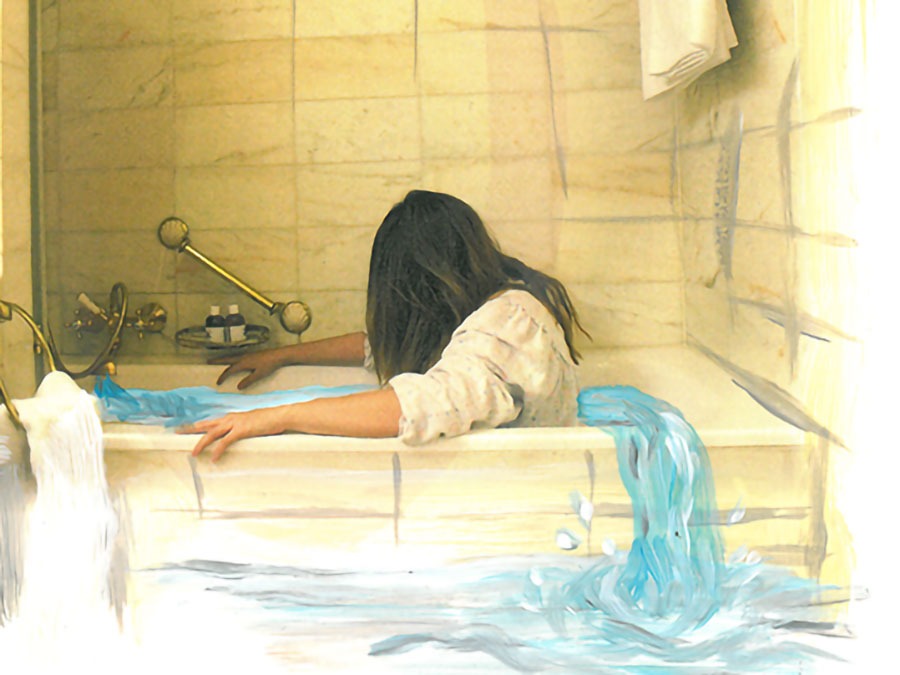 Her paintings are usually expansive and function as stage settings in which the artist performatively performs. Often she creates picture ensembles with which she tells stories with wit and irony. Sometimes painting supplements her with small poetic texts, which are painted on canvas, give the viewer a special twist and with which she documents her attitude towards life. Something with the sentence: “Stop crying your heart out” – find your way with what you can not change, what happens to you and around you. She likes to stage herself with a wink and lures the viewer to look her straight in the face. Your topics are diverse. She is refreshingly provocative. For example, with her painting “No Romances Without Finance” showing an old man hugging and hugging a young woman. As an artist in residence, she has shown in Vorarlberg the contrast between beautifully staged tourist world and dark political past through darkly painted advertising images.

“The performative runs like a red thread through Johanna Braun’s work. In the sense of an activity performed in front of an audience, the performance itself is only one part in the work of the busy young Viennese artist. Again and again, Braun fixes the format to the figure of the hysteric, thus tearing the boundaries of the obvious to the private, intimate. Gestures of disturbing transgression is Johanna Braun’s actual artistic principle. “Johanna Hofleitner in” Die Presse “- Kulturmagazin 20.10.2017)

Johanna Braun, born in 1987 in Vienna, is an artist, curator and cultural scientist living between Vienna and Los Angeles. Braun graduated in Fine Arts (2004-2008) and PhD (2012-2015) at the Academy of Fine Arts Vienna. Participation in numerous exhibitions, residencies and projects in Germany and abroad (including in Basel, Berlin, Chicago, Istanbul, Los Angeles, Moscow, New Orleans, New York, Venice, Washington DC, Zagreb). Her interdisciplinary research has received grants from the Federal Ministry of Arts and Culture (2014, 2015, 2017, 2019), an Emanuel and Sofie Fohn Foundation Scholarship (2015) and a Research Grant from the City of Vienna (2016). Since 2018 she is Erwin Schrödinger PostDoc Fellow at UCLA, Los Angeles, Stanford University and University of Vienna. In 2017, she published her monograph All-American-Gothic Girl: Justice-Demanding Girls in US-American Narratives (Passagen Verlag). In 2016 she published the artistic-philosophical anthology Summoning Rituals (Turia + Kant) and is published in numerous art catalogs, anthologies and journals (for example, the Verlag für Moderne Kunst, FemWiss Journal, De Gruyter, Diaphanes / University of Chicago Press, Medienimpulse, All-Over Magazine, Podium, Triedere). In the spring of 2020, the anthology published by Braun Performing Hysteria appears. Hysterical Images and Imaginations of Hysteria. (Leuven University Press) (www.johannabraun.com / www.performing-hysteria.com)